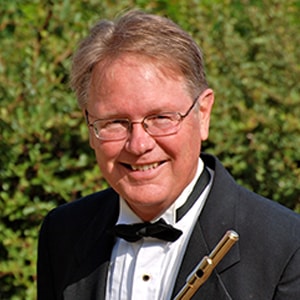 Gary Woodward, MM, brings to Azusa Pacific a wealth of experience, knowledge, and wisdom gleaned from a multifaceted career at the highest level of performance in orchestral, chamber music, commercial recording, and musical theater. Highlights of his more-than-40-year career as one of Los Angeles’ most respected freelance flutists include 25 seasons as the principal flutist of the Los Angeles Opera Orchestra and performances as principal with the Los Angeles Philharmonic, Los Angeles Chamber Orchestra, Los Angeles Master Chorale, Orange County Pacific Symphony Orchestra, Pasadena Symphony, American Ballet Theater, Joffrey Ballet, and the Bolshoi and Kirov ballet companies from Russia.

Woodward began teaching the flute at age 16 and accepted his first university position at age 26 at the University of California, Santa Barbara. He recently left his 31-year tenure at the University of Southern California to devote his time and energy to his students at APU, Biola University, and The Master’s College. He teaches each summer at Northern California Flute Camp and joined the faculty this summer at Credo Flute. He also serves as choir director at La Crescenta Presbyterian Church, where he is also on the Board of Elders.

Woodward is recording for motion pictures and television, having played countless scores written by the top composers at all of the major recording studios. He has also played in orchestras for more than a dozen first-class musical theater productions. He holds degrees in music from the University of Southern California and Chapman University, where his principal teachers were Roger Stevens and Arthur Hoberman. He also studied extensively in the master classes of world-renowned flutists Julius Baker, Jean-Pierre Rampal, Marcel Moyse, and Maxence Larrieu.