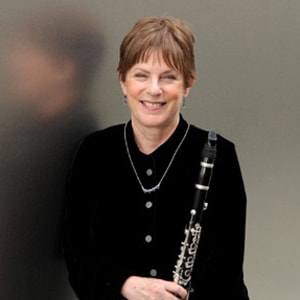 Michele Zukovsky is a renowned American clarinetist and longest serving member of the Los Angeles Philharmonic Orchestra, serving from 1961 at the age of 18 until her retirement on December 20, 2015.

Zukovsky states today, "I had a lot to prove." She remained undaunted, however, and built a fantastic career not only as an orchestral player, but also as a solo performer, chamber musician, recording artist, and teacher. Over the years with the Los Angeles Philharmonic she has performed clarinet concertos by Mozart, Weber, Hindemith, Nielsen, and Corigliano, among others. She gave the premiere of two important works: Luciano Berio's orchestration of the Brahms F minor Sonata (1986), and a clarinet concerto by American composer John Williams (1991). Zukovsky has also performed at the Marlboro, Casals, and Mostly Mozart festivals, and at music festivals in Austria and Finland.

As a recording artist, Zukovsky's most recent work has been a disc entitled Simeon Bellison: The Arrangements for Clarinet (Summit Records, 2008), a very interesting recording that includes not only arrangements by the well-known Russian-American clarinetist of the first half of the twentieth century, but also Jewish-themed works by other composers. Zukovsky has also championed the works of the Czech composer Bohuslav Martinů in two discs. The first of these, Otiose Odalisque (Summit Records, 1998), includes the well-known Sonatine as well as the Revue de Cuisine for a mixed chamber ensemble,Pastorals (Stowe) for the unusual combination of five recorders, two violins, cello and piano, and the Quartet for clarinet, horn, cello, and side drum. The second, Intermezzo, released in 1999, includes a variety of mixed chamber music.

Zukovsky's earlier recordings include the Brahms and Mozart Quintets with the Sequoia String Quartet (Electra/Asylum/Nonesuch, 1985); the Beethoven Duos for clarinet and bassoon (Crystal Records, 1987); and Stravinsky's L'Histoire du Soldat with John Houseman narrating (a live performance by members of the Los Angeles Philharmonic at the 92nd Street Y in New York City). The clarinetist David Blumberg has also produced recordings of several live performances by Zukovsky, including the Williams Clarinet Concerto mentioned earlier.

Alongside her busy performing schedule, Zukovsky is active as a teacher at several institutions, including the Thornton School of Music at the University of Southern California, and most recently at the Pasadena Conservatory of Music. The latter institution has organized an annual Zukovsky Clarinet Competition, the first of which was given in 2014.