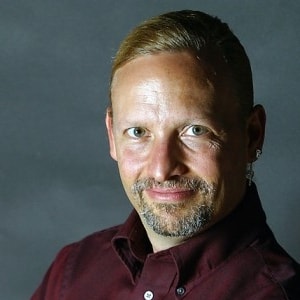 Christopher R. Keene is an Associate Professor of Technical Theater and serves as the resident Scenic Designer for APU. Mr. Keene received his BA in Technical Theatre from California State University, Long Beach and a Master of Fine Arts degree in Design & Production: Stage Properties from the University of North Carolina School of the Arts.

He worked for several years in Los Angeles, Nashville and North Carolina as a Makeup/FX Artist, Prop Master and Scenic Designer. He was a makeup artist for Knott’s Berry Farm’s Scream Team and a prosthetic and prop sculptor for Six Flag’s Magic Mountain. From 1987-1994, he served as an Elder and Associate Pastor for Sanctuary Church in Redondo Beach, CA. His work with the church included leading outreach and evangelism teams, drama and arts ministries and providing missionary training in the dramatic arts. In 1994, he relocated to Nashville where he toured and trained mission teams with the mime team “All The World’s A Stage.” His Tennessee credits include Opryland USA’s Howl-0-ween, the Nashville Opera, Tennessee Repertory Theatre, Nashville Shakespeare Festival and Christ Church’s annual Easter Passion Play. In North Carolina he worked on productions for the Piedmont Opera, North Carolina Shakespeare Festival and the NC Black Repertory Company.

His design work has been featured in issues of Southern Theater and American Theatre Magazine. He joined the faculty at APU in the fall of 2012. He was the Scenic Designer for the APU productions of Merrily We Roll Along, The Seagull, Much Ado About Nothing, Hello Dolly, An Ideal Husband and Faustus. He received an Award for Meritorious Achievement by the KCACTF for the Set Design for The Seagull.