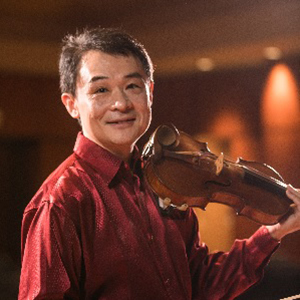 Violinist and teacher Takayuki “Yuki” Mori, BM, was a student of the legendary violinist Jascha Heifetz and is a graduate of The Juilliard School where he was a scholarship student of Dorothy DeLay and Masao Kawasaki. He also studied chamber music with Robert Mann of the Juilliard Quartet.

Having won numerous competitions and performing as soloist with orchestras in his youth while in Australia, including the ASTRA Competition, he auditioned to study with Jascha Heifetz on the advice of Kikuei Ikeda, the violinist of the Tokyo Quartet, and was eventually accepted as the youngest student of Heifetz at 16 years of age.

Since his U.S. recital debut in 1987, Mori has performed as soloist and chamber musician in the U.S., Korea, Australia, Japan, and Taiwan. Highlights of his performances include the New York premiere of "Sunrise of the Planetary Dream Collector" by the renowned American composer Terry Riley and a performance for the prince and princess of Japan on their official visit to the United States. As a judge, he has been invited to be on the jury at Osaka International Competition, Cecilia International Competition, Yejin Competition and others.

As a teacher, Mori served on the faculty at California State University, Los Angeles, and as a professor of violin at the University of Suwon in Korea. He has given master classes in the U.S., Korea, and Taiwan, and has taught at Kinhaven Music Festival, Seoul National Symphony Orchestra Music Festival, Tateshina Music Festival in Japan, and others. As a conductor, Mori conducted The Seoul Metropolitan Symphony Orchestra at the opening ceremony for the 46th Korean Academy Awards (Daejong Sang) as well as the Seoul National Symphony Orchestra and the Planetary Chamber Ensemble, among others. As a composer, his compositions have been performed at the Purcell Hall in London and Tokyo Bunka Kaikan Hall by the Ensemble Sakura.